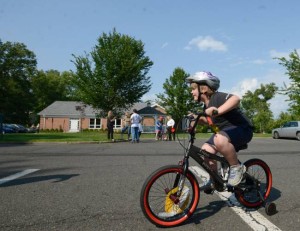 The 11-year-old had just been given the bicycle, and it was her first such ride ever.

The experience apparently left her breathless: After peddling across the library parking lot, her dad Steve Gorin keeping her steady, a shoulder shrug was the only expression she could offer about the sensation.

But for some grownups who helped make it happen, it was another instance of watching a kid take a brief ride away from hardship. And they got to see that moment repeated as three of the Gorin children — Lynsey, Corey, 14, and Timmy, 5 — were given bicycles, helmets and bike locks purchased by the Long Island-based non-profit Bikes for Kids in America.

Sasso’s long-time coworker, Enrico Deluca, started the nonprofit in November and has given away 250 bikes since Dec. 8 to needy children in New York, New Jersey, Connecticut and Florida. He started Bikes for Kids in America because he grew up in a one-bedroom apartment with two siblings and a single mother who barely got by.

Read the full article at NorthJersey.com

Volunteer Your Time
Donate A Bike
Share A Story